You are here: Home › Busy on call shift
By Fionnuala on November 15, 2020 in Park Pets Blog

Blackie caused a commotion here last Thursday night. His owners called to say he had cut his foot; and they were very distressed on arrival. It was dark outside; and I couldn’t see them very well.

When we brought Blackie inside; I was immediately worried. He was pouring blood. He had severed an artery and a vein in his foot. He had a deep cut through his pad; and he was in trouble. 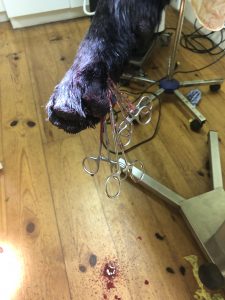 I applied a tourniquet; and a pressure dressing; and immediately phoned for help. My husband; who is always quickest on the scene for an extra pair of hands; was in a zoom meeting with his boss; so I called vet nurse Chloe. While I was waiting; having a touch of the drama about me; I was imagining the war wounded at the front; how they would stop bleeds on the battlefield 😂.

Chloe was in the clinic within minutes to help me. I told her it’d only be twenty minutes to find the artery and clamp it off and I’d be ok after that.

While we were operating on poor Blackie, the phone rang. It was a c-section. The phone rang again; another c-section. I thought Chloe was joking; but no. Chloe left us at almost 3am… we spent the whole time fielding surgical emergencies. 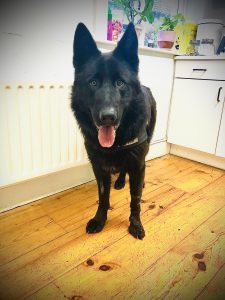