You are here: Home › Foreign body surgery
By Fionnuala on December 30, 2020 in Park Pets Blog

Teddy had his Christmas dinner early. Except it wasn’t dinner. It was a big glove. And it got stuck. He didn’t tell anyone; but he started to feel funny, and decided he wouldn’t get out of his basket. His tummy hurt.

He presented yesterday with a very sad face. His owners had no idea what he had done in secret. A survey radiograph alarmed us! Lots of dilated bowel loops; and gas…. classic signs of obstruction. Our ward was full of patients, and we were tired; but these kinds of surgeries can’t wait. Even though it was Sunday, it was best for Teddy to get him into theatre without any delay. 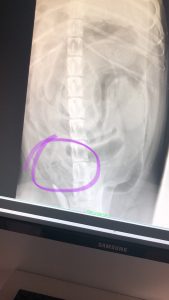 Our brilliant vet Ian was on call, and he dropped everything and came to the rescue to take Teddy to emergency surgery.

Sure enough; the disgusting half digested glove revealed itself like a little alien hiding in the bowel. After carefully removing it, Ian repaired his bowel, and his abdominal incision, and we kept a close eye on him overnight. 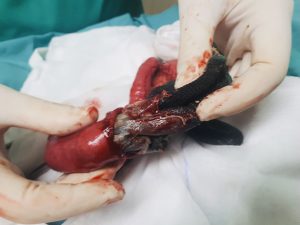 He’s doing well today and he had some breakfast. He will be sent home to recuperate. We’ll check him again in two days to make sure he is healing ok and that he doesn’t develop a secondary infection. 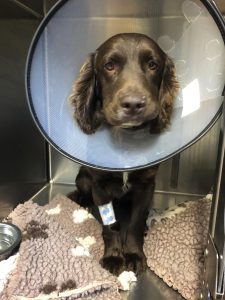 Hopefully he’ll be all better just in time for Christmas. Ideally it’ll be a nice bland turkey dinner for him though; no outdoor tools or socks or anything like that allowed on his plate….

Morning clinics
Monday to Saturday 9.00am to 1.30pm