You are here: Home › Behind the scenes of a caesarean Section
By Fionnuala on November 12, 2016 in Park Pets Blog 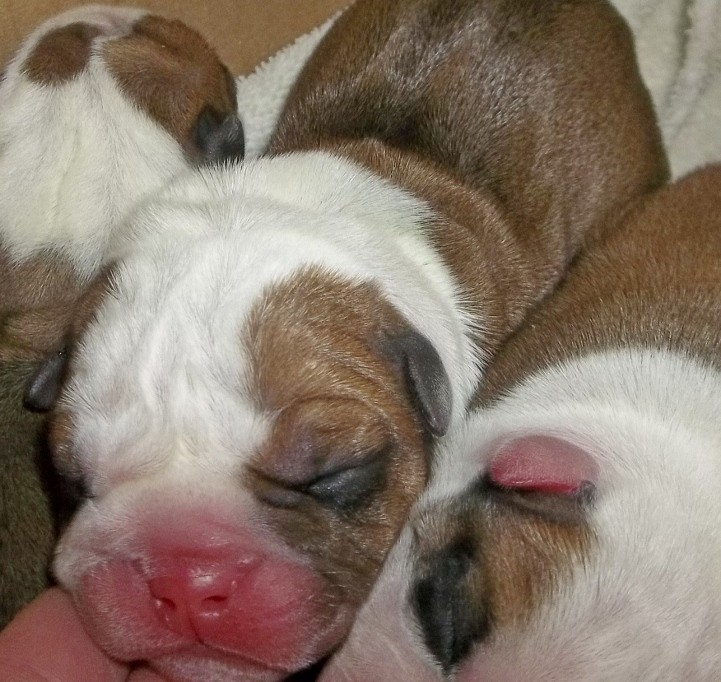 We had an emergency call from British Bulldog owner last Sunday morning. Their bulldog was very distressed and uncomfortable. She was four days from being full term with her pregnancy so I elected to perform a Caesarean section.

I called in our qualified veterinary nurse, Melissa, and we immediately swung into action. While she was on her way I gave the theatre and prep room a clean down with disinfectant, ran the surgical instrument pack through the vacuum autoclave, switched on the theatre lights, checked the anaesthetic circuit, checked the oxygen generator and warmed up some intravenous fluids in the microwave. I calculated out pain medications for the dog’s weight and carefully drew them up in a syringe. When Melissa arrived she did final checks of the theatre, and laid out an endotracheal tube which goes down the airway to help the dog breathe under anaesthetic. We placed an intravenous catheter in her leg, administered the anaesthetic agent, and she went quickly and safely under anaesthesia. Then we connected up our monitoring equipment. It’s always reassuring to hear the bleeps of the monitors as the dog breathes.

With caesarean, preparation is critical. Cutting edge knowledge of anaesthetic technique, rapid and safe induction of anaesthetic, a quick and careful surgical technique and emergency care of the puppies all count towards a good outcome.

The owners were very nervous but they were enlisted to help with reviving the newborns. They waited in reception whilst we got underway. Everything went very smoothly with the anaesthetic and I quickly had one pup delivered. He was blue and not breathing which commonly happens with bulldogs. Melissa used all her nursing skills to revive him. She applied respiratory stimulant drops to his tongue and.. all of a sudden.. he took a great big breath. Owners were thrilled but it was soon back to theatre to collect three more healthy pups.

Mum and pups did brilliantly. During closure I placed some surgical staples instead of traditional sutures. These are very hard for either mum or pup to remove and so they are a great solution for Caesareans.

Ten days later and mum is fine, and the pups are thriving thanks goodness.