You are here: Home › Christmas miracle
By Fionnuala on January 5, 2021 in Park Pets Blog

Every year we have a little Christmas miracle case. This year it’s Luna, a frightened, paralysed stray kitten.

Luna was brought to us with a sad history. She was collapsed and her front limbs were completely paralysed. She had been found in a ditch. Initially she was perfect, but she grew weak after two days, and became ill. She saw three different vets before us. When we met her, her front legs were rigid; she was unable to stand, use her litter tray or feed herself. Her situation was serious.

Her extraordinary finder, Jennifer, just wouldn’t give up. She was syringe feeding her and looking after her. She came to us as a last hope.

Her examination revealed grim news. She had severe neurological deficits; and her prognosis for recovery was bleak. But we will never give up where there is even a slim chance, especially with a baby. We said to Rebecca we would do all we can, but if she wasn’t improved after six weeks, we would have to let her go.

We explained that her disease might possibly be due to a trauma, a parasite, an infection, or an inflammatory disease. A human would need an MRI, an extensive battery of blood tests and serology, and possibly a CAT scan to discern the cause. With Christmas upon us, this just wasn’t an option. We did virus screens, but we had to treat her before her time ran out.

We decided to treat all possible causes in the hope that we might help. We also started acupuncture sessions – and we saw her for three treatments before we closed for the holidays. 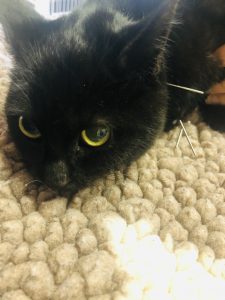 Acupuncture in a paralysed cat 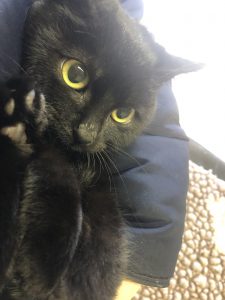 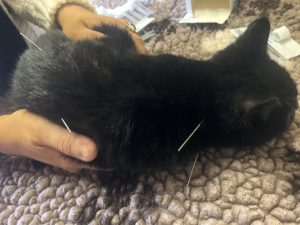 On her third visit, Jennifer saw Luna’s paw moving at home, and she could see other tiny improvements. Her limbs were still rigid though, and I wasn’t sure she would improve.

But, when she came back this week for her fourth session of acupuncture, all the rigidity had left her legs; and she was starting to play and walk. She could use her litter tray!

She has a long way to go, but she’s getting better! With so much bad news about, it just made our day to see this almost hopeless case beat all the odds. In one of the photos attached, our little boy Elliot wandered into the clinic, and he just had to give her a hug. The kids know about our cases, and they love to see mum making the animals better.

When you think nothing will get better; just hold on. Little miracles do happen! Sometimes there’s nothing we can do for some cases; but where there’s hope, we’ll pull out all the stops. Hopefully Luna will fully recover. She’s a gift – everyone who meets her just adores her.